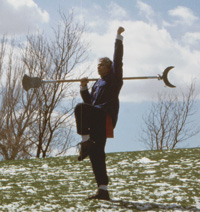 Buddha Zhen is also the Kung Fu Cowboy, so as Buddha Zhen, he expresses himself differently in music. Some of his students refer to his Chinese style music as, "Chinese Folk Rock." From solo songs featuring Buddha Zhen on shakuhachi and solo flutes to the 13-minute song, "In the Pool of Enlightenment," on his debut album, Tai Chi Magic 1, the Spirit Wolf of Truth always has guiding messages and ancient wisdoms to improve your life and improve who you are.

About Shaolin Records
Shaolin Records was launched in 1984, releasing vinyl records and cassette tapes of Kung Fu music from Santa Monica, California. With its' origins in Shaolin Kung Fu and Zen Buddhism, Shaolin Records strives to 'enlighten and entertain™.'

About Buddha Zhen
Zhen Shen-Lang, the Chinese name of Richard Del Connor, translates to, "Spirit Wolf of Truth." Buddha Zhen was named by the Chen family who had recently moved from Chen village below the Wutang Temple where Tai Chi was created.